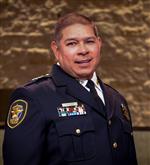 EMS ISD is pleased to announce that career law enforcement veteran Charles Ramirez has been selected as the district’s new Director of Safety and Security. Ramirez joins EMS ISD following his retirement from the Fort Worth Police Department, where he served in various enforcement and high-impact leadership roles for 29 years. He retires from the department as Assistant Chief.

Ramirez is a familiar face in both the EMS ISD and Fort Worth communities. A lifelong resident of the EMS area, Ramirez and his five brothers and sisters grew up in Blue Mound and attended Gililland Elementary, Wayside Middle, and Boswell High schools. He was a member of the Pioneer cross country and track teams, and competed on the team that placed second in the 1984 Cross Country 4A State Championships. He graduated from Boswell in 1985.

“We are pleased to have Mr. Ramirez leading our safety and security efforts for the district,” said Dr. Jim F. Chadwell, Superintendent. “In addition to his wealth of law enforcement expertise, he brings the added perspectives of an active parent and community member in our district. These experiences, paired with his focus on building relationships and providing safe learning environments for all, align with our district values and community expectations. I look forward to seeing the positive impact Mr. Ramirez will have in our schools and community.”

Ramirez joined the Fort Worth Police Department in 1991. Throughout his extensive career at FWPD, he served in many duties including neighborhood patrol officer, detective, sergeant in field operations and traffic investigations, lieutenant in recruiting and background checks, and commander for neighborhood police operations. He then served as deputy chief for several bureaus, overseeing divisions for Homeland Security/Intelligence, Criminal Investigations, Special Operations and Tactical Command (SWAT), Traffic, Communications, Forensics, Narcotics, Computer Crimes, and Field Operations. He also led operations in support of Youth Services.

Administrative roles during his tenure also included serving as duty captain as well as administrative captain for the FWPD Chief’s Office. Upon his promotion to assistant chief, he was assigned to the Finance and Personnel Bureau. At his retirement, he led the Support Bureau, which encompasses Tactical Operations, Intelligence, and Investigations; Criminal Investigations; Forensic Science; Property/Records Management; and Community Programs, including volunteer and youth programs.

“I have been blessed with a long and fulfilling career in police work, and now I am looking forward to the next chapter,” Ramirez said. “I am fortunate to be coming home to work in a community that I have been a part of for so many years. As a multi-generation family in EMS ISD, my goal is to have our district be one of the safest school districts in the state and nation, and I will take this responsibility to heart each and every day.”
As EMS ISD’s Director of Safety and Security, Ramirez will be responsible for the district’s safety and security program at all schools and facilities. He will work in partnership with campus leaders to supervise the district’s Safety and Security Specialists and manage the School Resource Officer program. He will lead crisis response efforts and collaborate closely with district departments and leaders. He also will manage the district’s truancy program, assist with student discipline concerns and alternative placements, and oversee district and campus safety plans and audits as well as safety and security policies, directives, and standards.

“I hope to use my experience in police work and my love for this community to build connections with students and families, so we all can continue working together to create safe and positive environments for students,” he said. “I also hope to use my role to build bridges between students and law enforcement, and hopefully inspire those who are interested to consider law enforcement as a career.”

Ramirez earned his bachelor’s degree from Midwestern State University and his master’s from the University of Louisville in Kentucky. He is a graduate of the Southern Police Institute’s Administrative Officer Course and the FBI National Academy. He holds numerous law enforcement certificates, designations, and experience including Master Peace Officer, Enhanced Incident Management, Threat Assessment, SWAT, Command Leadership, and Government Performance. He is also a veteran of the United States Navy.

In the community, Ramirez also has been active with numerous professional and civic organizations. In EMS ISD, he served most recently on the EMS ISD Strategic Planning Team, which designed the Aspire 2025 Strategic Plan to chart the direction for the district for the next five years.

When not at work, Ramirez enjoys hiking, golfing, and watching movies, especially old favorites from the 1980s. He and his wife, Karen, have two grown daughters: Sarah, a Boswell 2015 graduate, now serves as a police officer in the area; and Leslie, a 2016 Boswell graduate who recently graduated from the University of North Texas. His wife also graduated from Boswell in 1989.

Ramirez’s first official day in EMS ISD will be March 1, 2021. He will work closely with members of the executive leadership team, campus administrators, district security personnel, and local police to ensure a smooth transition.