Students at Lake Country Elementary School ended the week with spirit as they gathered for the first schoolwide house assembly of the 2022-2023 school year.

On the morning of September 9, students, wearing the colors of the six “houses” at Lake Country, gathered in the gym to celebrate each other and their shared pride as Lake Country Lions.

During the assembly, along with showing their spirit for the character trait represented by their house, the students also competed in fun, friendly games. The champion was crowned for sliding an Oreo from her eye into her mouth the fastest, eliciting a roar of excitement from all students and staff.

“The goal is to build and strengthen relationships between students as well as between students and staff,” Anke Bracey, Principal at Lake Country said. “Our six houses represent the six character traits in our Lion Creed to keep great character continually in the forefront of what our students are seeing.”

At the beginning of the year, students and staff were randomly divided into six houses, represen 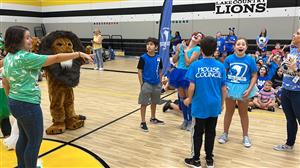 “Our House System is a big part of our culture at Lake Country this year and one way we are striving to create communities within our school,” Bracey said.

The house system at Lake Country aligns with the focus on student engagement and staff engagement, along with social and emotional support outlined in EMS ISD’s Aspire 2025 strategic plan. Each EMS ISD school works as a community to develop a campus culture that allows the campus community to support each other and achieve these goals.